With the coronavirus, Hongkongers are forced to stay at homes and avoid travel. The sky becomes devoid of planes and travellers. The number of planes flying between Hong Kong and Japan has plunged from nearly 2,000 flights per week in January to only about 100 in early April. At least 90% of the flights are evaporated.

See how the flights between Hong Kong and Japan disappeared with charts and maps.

Hongkongers are well-known for their love for Japan. In 2018, 2.21 million visitors to Japan are Hongkongers (FYI, I went to Japan 5 times in 2019). People always joke Japan is our “home sweet home”, and saying travelling to Japan is “going back to home”.

All until the coronavirus spread from China to every country around the globe.

Airlines started to reduce flight frequencies since early February. Still, the virus spread further and further away from its origin, countries had imposed different measures to restrict the entry of foreigners. Though, most travellers are already not willing to stay inside the sealed air cabin for hours.

The wanderlust is on an infinite pause.

The number of planes in the sky dropped drastically. Even there are still plenty of passenger flights, they are just mostly empty planes carrying air in the sky.

We love data. So, how the number of flights free-fell during the past few months?

The Plummet, in Chart

Here, the horizontal axis shows a timeline from 12 Jan 2020 to 14 Apr 2020. The vertical white lines indicate Sunday. The vertical axes measure the total number of direct flights on each day. There are 2 colour lines - the brown one includes flights travelling from Japan to Hong Kong, while the green one is from Hong Kong to Japan. Altogether, they compose this time-series line chart.

Observations near the vertical white lines are usually higher since the airports are usually busier during weekends.

The first confirmed case in Hong Kong happened on 23 Jan. The borders of Hong Kong were shut down one by one in that week. After 5 Feb, there are only 3 ports of entry remain opened (One of them is the airport). Airport was still business-as-usual at that time.

Immediately, because of the pandemic, the airlines started to decrease their flight frequencies.

The drop starts in early February. Between 3-5 Feb, several airlines including ANA and Japan Airline (JAL) released statements that they will gradually decrease the number of flights between Hong Kong and Japan. JL029/JL026, the flight flying between Haneda and Hong Kong, rescheduled from daily flight to 4 flights per week.

These “temporarily” policies were originally implemented till the end of March. That is not how the story goes, of course.

The real nightmare happened in early March. On March 5, Japan announced several new policies to visitors. Starting from March 9, Japan tightened its immigration controls and started suspending visa-free arrangement to Hongkongers. Even you got a visa, you still need to complete a 14-day quarantine period by staying in the designated areas.

Japan has cancelled visa-free admission for Hong Kong residents and people from Macau as part of sweeping anti-coronavirus restrictions that will also keep out mainland Chinese and Korean visitors.

This is an equal saying of “no entry for Hongkongers”.

This is what caused the cliff between March 8 and March 9, the number of flights fell from 50 flights per day to only 10-20 flights per day. Some of the flights with reduced frequency are then even become suspended.

The Plummet, in Map

Before the virus outbreak, we have 18 airports having direct flights from/to Hong Kong. The busiest airports include Tokyo (both Narita and Haneda), Kansai International, Nagoya and Fukuoka. Meanwhile, some airports have only 1-2 direct flights per week, like Niigata, Tokushima and Miho.

Following are the maps showing the number of flights between Hong Kong and Japan in January, February, March and April. Again, the brown lines are flights travelling from Japan to Hong Kong, while the greens are from Hong Kong to Japan. A thicker colour implies more flights between two airports.

NOTE: the curves are not the actual flight paths. 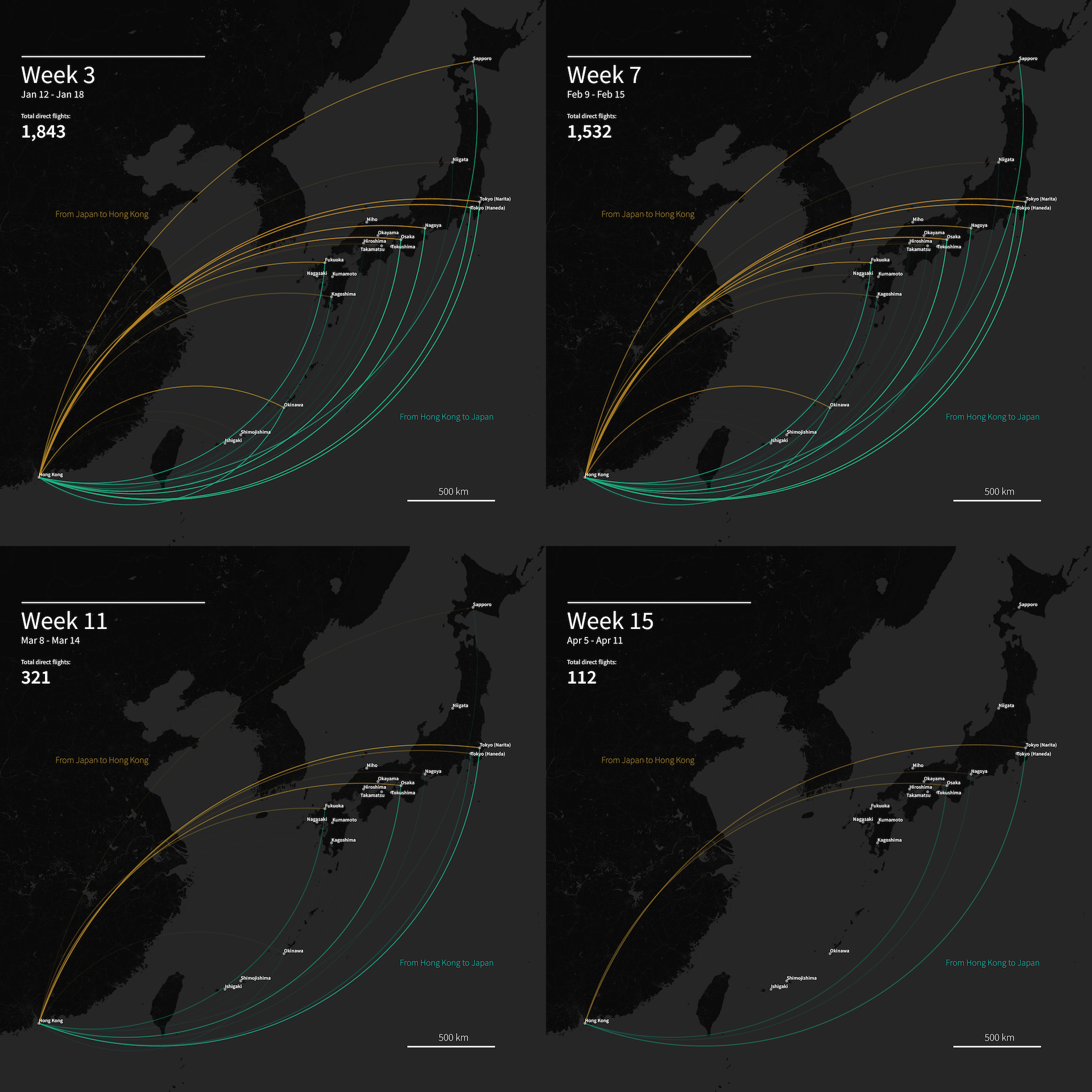 The announcement on March 5 also restricts the ports of entry for Hongkongers. Since then, only Tokyo Narita and Kansai International Airport (a.k.a. Osaka) are allowed for foreigners' entry. Part of the flights to Haneda Airport is changed to land on Narita instead.

While Tokyo (Narita) and Kansai International Airport still have a few flights flying from/to Hong Kong, the frequency is already drastically dropped compared to early January. Hong Kong Express (UO) has suspended ALL of the flights since March 23.

It’s still a long way for Hongkongers back to their home again. On mid-April, Hong Kong Express announced the suspension of flights will be extended again till June 19. The situation, in the meantime, started getting worse in Japan. The virus started to spread in Tokyo, where the number of confirmed cases increased in a sort-of exponential manner. The government announced emergency condition and other anti-coronavirus restrictions to reduce the citizens travelling during Golden Week.

It will be a long and tough period for all homesick travellers.

If you are interested in how the spread of virus changed the sky across the globe, check this article from Washington Post.